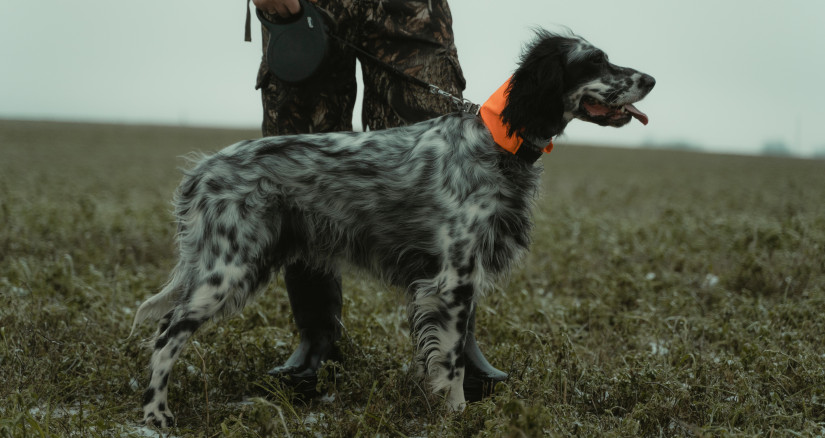 Thrill of the Hunt

Sniff sniff. My eyes dart around as I pick up speed, running from bush to bush chasing the ever faint scent of rabbits. I know they're here somewhere. They’ve got to be. Sniff sniff. Sniff sniff.

As I run through the plot of woods, ducking and weaving through branches and brush, my focus narrows on a particular scent trail that seems to be fresher than the others. It takes me from bush to bush, following a path where the long grass tangles the least. The trail takes me up the creek and around the bend all the way to the fence line at the end of the property. Where the trail goes on the other side of the fence, I will never know.

My owner catches up to me, puffing and panting, with a look of disappointment on his face. He looks down at me, pats my head, and gives praise for my efforts. I sit down and look at him, wondering where we’ll go next. He stands there, clad in hunting garb with his shotgun perched over his shoulder. His game bag remains not just empty but unsullied by the blood of a successful hunt. His head lifts, signaling to me that it’s time to move on, and move on we did.

We trudge deeper into the woods trying to find any semblance of life besides the immeasurable amount of vegetation. A few squirrels scamper up trees here and there, but the shotgun never sounds off. There is no doubt he wants to take the shot, just to have one success under his belt and some meat in the pot, but he resists the temptation to avoid spooking any rabbits that may be lurking.

We eventually reach the main path in these woods, much to my relief. The prospect of going home early couldn’t have come at a better time as snow began to fall. The cold creeps up my neck, so I shake my coat out and trot a bit faster. My hope is that he will follow suit and we can get to the warm car faster, but before I could look back to check, something powerful fills my nostrils.

I can feel my eyes shoot open and my gaze lowers to the trail. I come to an abrupt stop to figure out where this intoxicating odor is emanating from. Sniff sniff. Not right here. Sniff sniff. Not over here either. I continue sniffing every little thing I come across, briefly catching the scent again and again. It is everywhere and nowhere all at once. The only certainty is that it is fresh, and it is close.

Very suddenly I hear a crash behind me. I turn around as quick as I can to catch a glimpse of whatever just shot out of this bush, and that’s when I see it. Rabbit. Before my body was finished turning, I lurch forward with all my might and begin this unrelenting pursuit. I run faster than I ever have before, determined to give my owner the successful hunt he so desperately needs. We shoot around every tree, crash through every corner, the rabbit darting under every obstacle while I jump over. I can feel the rabbit getting closer, though I can’t see it at all, other than a blur through the grass and shrub. The smell grows stronger, ever so slightly the nearer I draw. I can almost taste it.

I know I need to drive it back to where we came, so I veer to the side. I lost some of the distance I had gained, but the plan was working. The rabbit veers to the opposite side, thus circling back. I can see flashes of bright orange clothing through the dense brush, so I slow down just a bit to avoid the hellfire that was to come once he had a shot. The rabbit keeps up its pace, desperately trying to escape me. I continue giving more and more distance until I hear the sky shatter with a deafening boom. Then another. Each shot shook me to my core, but I’ve been around it enough to know that the payload is never meant for me.

As the echoes of the last shot dissipated into nothing, all was silent. I regain my composure and trot over to my owner. He stands there, blood curdled and red in the face. I can even see the glimmer of a single tear beginning to form. I had failed him once again. I lower my head in sadness and slink toward him, desperate for his forgiveness. I feel shame and guilt, fully responsible for yet another utter failure of a hunt. He walks over to check for any sign of blood and I help by sniffing around. Still nothing.

His eyes widen as he stares into the ground just in front of the bush that the rabbit ran through. Curiously, I look over to see what he is looking at when the sparkle of a small drop of viscous liquid catches my eye. We walk over to it, excited to see some blood, only to find out it was something else, maybe a sap of some sort. His head drops, and so does mine. Shame. That’s what I feel. That’s all I feel at this moment.

He looks at me with weepy eyes and smiles. He crouches down to my level and surprises me with a hug.

“We almost did it buddy,” he says. “We almost had him that time. That was fun, huh buddy?”

He puts his hands on my face and looks at me.

I wag my tail and pant with joy. Yeah, that was fun. Let’s go home.

About the author: Simon Thomas is a devoted dog dad whose stories are inspired by his two beagles, Sally and Ramona, and his golden Labrador, Sullivan.