Cats and dogs are both Carnivora; however, there are differences between their metabolisms and lifestyles.1 These differences in the diets have led to distinct differences in the metabolisms of the two species. Cats, for example, are less capable of dealing with times of limited food, whereas wolves are adapted to a feast and famine lifestyle.2, 3 Cats, like most carnivores, have a short digestive tract and do not produce large quantities of enzymes such as amylase for starch degradation. They also lack mechanisms for creating some amino acids such as niacin, taurine, and arginine and, therefore, need to consume them in their diets. This is largely due to never undergoing the same pressures to develop those abilities as were dogs.

Commercial pet food is often the first place consumers look to improve the health of their pets.4. These pet foods come in many forms, such as extruded dry kibble, thermally stabilized wet, and, more recently, fresh or raw. By far and away, extruded dry kibble is the most popular option. The extrusion process provides a durable, long-lasting product that is easy to store, ship and feed. The extrusion process involves heating to temperatures between 90C and 150C and requires around 20% of the diet to be starch to act as the glue keeping the kibbles together.5, 6

Extruded feed often contains Maillard reaction products (MRPs).7 The Maillard Reaction is a complex series of chemical reactions that result in many color and flavor compounds, as shown in Figure 1. The Maillard reaction begins with the reversible reaction between a carbonyl and an amine group to produce Schiff Bases10. These basses are usually nitrogen double bonded to the side chain of an amino acid (R-group) to create early-stage Maillard Reaction products (MRP) in a reversible reaction. Side chains are the aspects of amino acids that differentiate them, as shown below.

These Schiff Bases are often unstable and quickly transform into Amadori products or dicarbonyls. The most common place MRPs are formed is during cooking, where high temperatures, alkaline environments, and humidity increase the reaction rate. An in-depth review of the mechanisms and products of Amadori rearrangement was completed by Yaylayan et al.9

A set of compounds akin to MRPs are called Advanced Glycation End Products (AGEs). Through oxidation or crosslinking, dicarbonyls become AGEs. Amadori products with an amino acid can degrade or rearrange and oxidize through irreversible reactions into AGEs.8, 10 However, AGEs have many actions within the body, and not all are understood. Interest in AGEs has increased dramatically in recent years. Because these AGEs are found in pet foods7 and subsequently absorbed as well as being produced endogenously,11 it is useful to understand where they form, in what quantities, their functions, and methods for regulating systemic concentrations.11 AGEs are of particular concern due to the acute stress they and their intermediates can have on humans12 and likely pets. AGEs have different effects depending on the specific diseases they are involved in, such as diabetes, Alzheimer's, and kidney failure, as well as their impact on aging.13 Both diabetes and renal failure are increasing in prevalence in house cats, as reported by Hoenig, 2014.14

Most AGEs facilitate oxidation of body tissues which denatures proteins both inside and outside of individual cells as well as damaging intracellular matrices, structures that act as scaffolding in and around cells.16 It is thought that this is the main method through which AGEs affect chronic illnesses.17 One known method of action of AGEs involves protein cross-linking. Cross-linking occurs when an AGE's active site binds to an R-Group. In some cases, the R-group under attack will form a bond with another nearby R-group. In other cases, both sides of the AGE will bind to R-groups, creating a bridge between the two amino acids in the protein. This process is slow but leads to increases in tissue stiffness and loss of protein function. These mainly occur in long-lived tissues with slow turnover rates, such as the extracellular matrix, retinas, arterioles, myelin sheaths, glomerular basement membranes, some skin cells, and collagen fibers.18-22 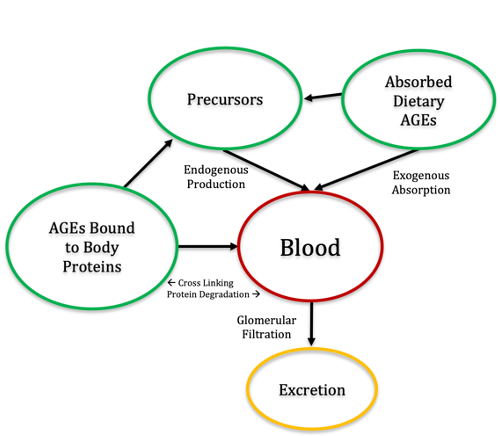 Figure 2: The schematic flow of AGEs through body systems, Precursors include amino acids, reacting sugars, and other factors, and absorbed dietary AGEs include AGEs in the digestive tract from the animal’s diet.

The significance of the impacts of AGEs lies in the interaction between the body’s natural mechanisms for eliminating them, such as AGE receptors and proteolysis, and the AGE load on the system, as demonstrated in Figure 2. Especially in true carnivores, endogenous production, or production that occurs within the body and is not related to food that is consumed, is largely the only production their systems are set up to handle, and therefore having more AGEs and/or digestible starch in feed could potentially interact with that which maintains body tissue health and controls the risk for the aforementioned chronic diseases.

About the Author: Irene Lambregts is the assistant manager of technical sales at BSM Partners and has a master’s degree in animal science. Originally from Idaho, her childhood was full of caring for and learning from the pets in her and her friends’ lives.